Comments Off on 2019 Chairman’s Message

Another busy year has been completed, and like other clubs on the Tweed, we have witnessed both challenging and rewarding times.

The first six months of the financial year was a financial success for the club. At the February half yearly Members Meeting, I reported an Operating Profit of $195,684. At the end of June 2019, our Operating Profit only increased by $81,921 to $277,605. This last 6 months period was a very disappointing result especially knowing the outstanding effort put in by our General Manager and his staff during the Christmas period. However, I must remind all members and myself that there was reported to be a general downturn in retail and hospitality takings across the nation and not just our club. As a result, the Board was excited that some aspects of the business held and even grew.

Gaming was the most pleasing outcome for the financial year. This year we witnessed an overall 4% increase in our income from our poker machines. Even though we saw a slowing of takings in the second half of the year, our overall performance in this area was pleasing when compared to other clubs in the Tweed. Undoubtedly, our General Manager’s commitment to continually upgrade the machines has played a significant role in this positive outcome.

Bar sales gave us a satisfactory return with a 3% overall increase on 2018 results. In the last 6 months there was a significant slowing of income in this area owing to the general slowing of the economy and the responsible reaction of members to the new Drink Driving legislation introduced by the State Government.

Several years ago, the Board decided to upgrade the TAB area and the downstairs bar. At that time, Clubs NSW was advising clubs to upgrade their food offerings and so we incorporated the new cafeteria into the upgraded bar. This decision has been very profitable for our club with around $160,000 revenue coming from food sales in this area. There is no doubt that this source of income can continue to improve as we look at using more modern equipment which is capable of producing a quicker response to orders.

Members would be aware of the report I gave at the 2018 on our 5 Year Plan. As we went about implementing that plan at the beginning of 2019, it became apparent that things had changed significantly from when we started to develop the Old Club House into the Club Office and move the Bottle Shop into the old office. Changes include:

As a result, the Board has decided to move in a different direction in the coming years. The Board will borrow money and use it to develop the upstairs Restaurant which will allow us to start a whole new venture with the newly appointed Asian Chef. This move will undoubtedly give us a better cash flow in the coming years.

As we look down the track to the time when there is a need for a new venture to move the club forward, I have no doubt that food will play an important role and better catering for families in an outdoor environment will be needed.

On the opposite side of the ledger, our expenditure has increased 4%. The Board Directors have done complete surveillance of expenditures such as the wages of employees, advertising and  insurance costs and general maintenance costs. In the coming years, we will need to look at replacing a Courtesy bus as we are continually addressing rust and general repairs. Just recently, the Fair Work Commission increased the minimum wage by 3% from 1st July 2019. As a result, our budget for our next financial year will have to cater for this increase and other related entitlements.

Volunteers continue to play a financial and operational role within the club. Thanks are extended to the men and women who have given their time and effort in a variety of activities around the club. From all reports, the sharing of Head Greenkeeper with Kingscliff Beach Bowls Club continues to produce quality outcomes for both clubs. Well done Dave Perez!!!!

This year we saw the passing of Life Members Ken Hansen and Bert Overall. Ken was a founding member and inaugural Secretary of the club in 1963. Bert joined the club in 1968 and was a regular member of Pennant teams. He was a member of the winning 1979 Div.5 team which won the first Pennant flag for the club.

Finally, as I complete my 10th Annual Report as Chairman of the Cabarita Beach Bowls & Sports Club, I wish express my appreciation for the opportunities this role has given me. My thanks are extended to all the Board Directors, the General Manager, Nick Brabham, and the staff of the club for the highly professional support they provided to me over the last twelve months.

In September of 2012 the club installed a 62.5 kWh system from Infinity Power. Since its installation the club has generated over 130,000 kWh using this technology. Along with the upgrades to lighting and other energy saving initiatives the club has been able to reduce its usage by over 4,000 kWh per month. This not only is benefiting our cost control but has also reduced our carbon foot print by 410 tonnes in the last 12 months.

This graphs shows the kWh reduction over the last three and a half years. 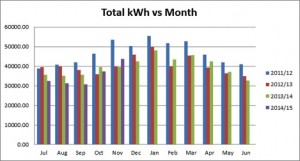 The Club will continue its commitment to green alternatives where possible in 2016.